Tennyson's Ulysses still resonates with me

I've never had a problem telling my classes when we hit a poem or work that I'm not particularly enamored to, mainly because I want them to know I'm serious when we begin something that is one of my favorites. This unit, we're doing a number of works that I'm very fond of, but none more so that Alfred, Lord Tennyson's "Ulysses." Ulysses, of course, is the Roman name of the Greek hero and protagonist of Homer's epic poem The Odyssey. It tells the tale of the king of Ithaca's ten year voyage home, and though he never stops trying to reach his kingdom and family, he enjoys the many adventures he has along the way. Tennyson's poem is continuation of that story that picks up several years after his return. Ulysses tires of the mundane and tedious duties of tending to his homeland and yearns for a return to the adventurous life he once knew.

"How dull it is to pause, to make an end,

To rust unburnished, not to shine in use!" 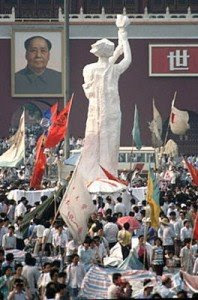 Thus, he turns his kingdom over to his son Telemachus and begins a dramatic plea to his old crew mates (those who didn't sail with him on his last voyage, apparently) to join him on one last glorious adventure. I've loved this poem for decades. I inherited most of my grandmother's books when she died, and one of those books was an old collection of Tennyson's works that smelled of attics and memories. I enjoyed Tennyson's poetry as far back as seventh grade because of his affection for classic heroic subjects like King Arthur and Odysseus, and I've always been a sucker for heroic fiction.

Yet it wasn't until college that I truly appreciated it, and for that I have to explain the time frame. I was going for my teaching certification at Edinboro University back in 1990. This was just shortly after the fall of the Berlin Wall and near worldwide collapse of Communism.

To those for whom the Berlin Wall is merely the stuff of text books and retrospective segments on Channel One, I will say that these were exciting times. The world was divided between East and West for as long as I'd been alive, and nothing represented that delineation more than that dour set piece of masonry, machine gun posts, and barbed wire. Seeing it topple and be smashed by thousands of frantic Germans seemed like a vindication of everything I'd ever read on the virtues of Freedom and Democracy. The only bastions of the communist menace left it seemed were Cuba (big whoop) and China...and China seemed like it was next.

I remember watching the events in Tienanmen Square unfold over the course of a few days. It seems odd now to think about it without also feeling the sense of horror and loss that accompanies the knowledge of how it inevitably turned out. I remember how exciting it was to see the hundreds, then thousands of young men and women gathering to request, then demand a measure of democracy in their country.

I didn't have any reason to think they wouldn't succeed; after all, communism had been shown not to work, and the abbreviation "U.S.S.R." was already being measured for a coffin, and plot for it was being dug to lay it to rest in the potters' fields of new social studies books. Nothing seemed more impressive to me at the time than the way the protesters (almost instantaneously it seemed) erected their own version of the Statue of Liberty. It was one of the most interesting times I could imagine being alive.

I had forgotten, however, that "may you live in interesting times" is considered a Chinese curse. 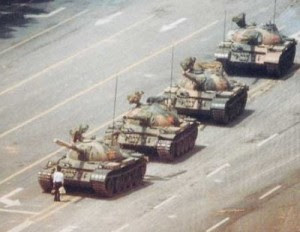 Dictatorships are notoriously fond of remaining in power, and the old, morally bankrupt men running China were no exception. They sent the People's Army in to quell the protests by any means necessary. The dread we felt watching the tanks rolling down the street towards the students was tense enough, but it was amped up to an unbelievable degree when we first saw the now iconic image of the lone student facing down those tanks while armed only with a book bag.

We don't know this guy's name or face. I'm still not sure we're 100 percent positive it was even a guy, but his actions in front of those tanks that day redefined the way I look at heroism. In the United States it would be risky proposition as well, but here we have oversight, we have the media scrutinizing everything the military does, and we have redress for grievances. In China none of that can be counted on to make a tank commander pause to consider the consequences when he finds 120-pounds-soaking-wet agitator yelling at him from in front of his fifteen ton vehicle.

By rights that kid should have become a big flat slice of street pizza. But he wasn't. After a stand off of more than a half hour, this kid cajoled, coerced and shamed the tanks into turning around.

That student had no way of knowing that he'd succeed that day. In fact, having lived in China and knowing what his government was capable of, I'd dare say he had to know he was likely going to his death.

He did it anyways.

The next day, of course, the tanks came back. They did not stop or turn around, and hundreds, perhaps thousands of protesters were killed or imprisoned, and to this day China remains a hidebound dictatorship.

So what does this have to do with "Ulysses"?

When we read this poem back in Edinboro, the professor had decided to show off some newfangled presentation material for the poem that involved watching various images of heroic acts caught over the years while a Shakespearean actor read a stirring rendition of the poem in voice over. There were many images that we're all familiar with: Martin Luther King giving a speech, the flag planting at Iwo Jima, the rescuers pulling baby Jessica out of a well in Texas. But when the poem got to the end,

"It may be that the gulfs will wash us down: It may be we shall touch the Happy Isles, And see the great Achilles, whom we knew. Though much is taken, much abides; and though We are not now that strength which in the old days Moved earth and heaven; that which we are, we are, One equal-temper of heroic hearts, Made weak by time and fate, but strong in will"

The presentation focused on the scene with the tanks. And when it got to

The image froze and zoomed in slowly on the grainy image of the young student, and at that point I got it.

Heroism isn't about doing the right thing knowing you're going to succeed; it's about doing the right thing even when you know you will probably lose. See, Ulysses doesn't plan on coming back from his voyage. He knows he will likely bump into Achilles, the great hero who died in the Trojan War. Doesn't matter--he's going anyways. True heroism is doing what's right for the sake of doing what's right. I probably wouldn't have picked up on that had I not seen a modern day Ulysses holding a book bag on a dangerous street in China back in 1989. Like his Greek counterpart, he realized the gulfs were ready to wash him down, but he faced them anyways because it was the right thing to do.
Posted by Unknown at 10:09 AM No comments:

Congress shall make no law respecting an establishment of religion, or prohibiting the free exercise thereof; or abridging the freedom of speech, or of the press; or the right of the people peaceably to assemble, and to petition the Government for a redress of grievances.

What I'm listening to

Listen to internet radio with Thethinkingatheist on Blog Talk Radio