HULK IS LEAST THEISTIC ONE THERE IS! 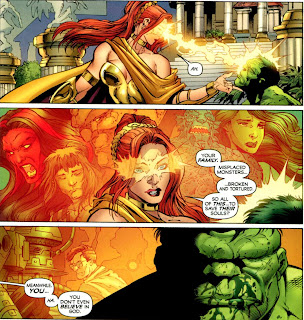 Marvel continues to out its heroes as rationalists this month as it comes to light the Incredible Hulk is, in fact, an atheist in his now plurally titled Incredible Hulks #622.

Ironically, this revelation comes courtesy of his battle with the Greek gods.

In the aftermath one of those universe-shattering crossovers that have become so frequent they hardly get mentioned on Twitter in the Marvel Universe these days, Olympus is revitalized and is apparently now standing off the shore of New York City.  The Hulk goes there to demand the gods whom he has helped alleviate the suffering of his newly extended family.  He makes a good showing battling centaurs, cyclopes, medusae, other creatures, and lesser gods.  When he goes up against Zeus, son of Kronos, cloud-gatherer, he who delights in thunder and marshals the thunderheads, he bites off more than he can chew.

After a brief but epic (no pun intended) battle, Hera inspects the battered and all-but-dead Hulk's mind and make an interesting discovery.  "You...Ha...You don't even believe in God," she says.

Of course, it would be silly to say he doesn't believe in "gods" (little g) when he's getting his green ass handed to him by one, so some might argue this statement doesn't make sense, or it shows the Hulk's irrational side.  But this is the surly, but intelligent Hulk that has been in the spotlight for a number of years now.  He's not as intelligent as his alter ego, Bruce Banner, but he's every bit as rational, and perhaps a bit wilier. While he concedes there are beings who call themselves gods in his world, he realizes there is a total lack of evidence for an omniscient, omnipotent being such as God (big G) is described as being.  In his reality one can punch a god in the nose, and still rationally call himself an atheist.

Posted by Unknown at 7:38 PM No comments: Links to this post

Congress shall make no law respecting an establishment of religion, or prohibiting the free exercise thereof; or abridging the freedom of speech, or of the press; or the right of the people peaceably to assemble, and to petition the Government for a redress of grievances.

What I'm listening to

Listen to internet radio with Thethinkingatheist on Blog Talk Radio